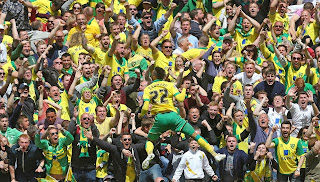 As some readers know, I am a supporter of Norwich City, the football team from where I was born and grew up. Today was a momentous day for City, as they gained promotion back into the English Premier League by beating Middlesbrough 2-0 in the packed National Stadium at Wembley. The match was worth about 200 million dollars to the winner, the richest single game in all of football.

I actually think we have a better team than when we were  in the Prem last year and so one can look forward to next season with some anticipation. As long as Liverpool don't re-hire Suarez we'll be OK (he scored 11 goals against us in 5 games).

But it was hard to enjoy the playoff final today, and most serious sports fans know what I mean. You see, it was just too important,  with too much riding on it. The result really mattered, and when that's the case it's difficult to relax enough to actually derive the slightest pleasure from viewing. Of course, the opposite; being miserable and depressed when they lose a big game; comes easy to the serious fan. Crazy. You wonder why we do it.
Posted by Jeremy Smith at 12:25 PM