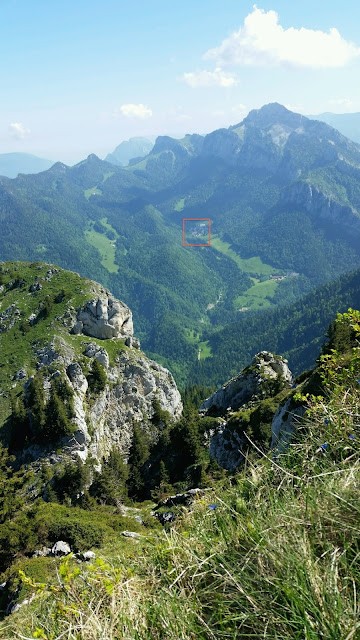 The bucolic view from the summit of Charmant Som in the Chartreuse, to which Didier, Fabienne and I hiked up early this morning. In the red square, nestled in the head of a valley,  is the Grand Chartreuse (Carthusian) Monastery. The monks in there are vowed to silence, "a way of attaining internal solitude" according to Father Dom Benoit. He is one of only two people who know the recipe of Green Chartreuse, that the monks distill, the "elixir of eternal life" that "cures all ills". Accompanying the reclusive monastic silence, then,  is a booze production machine working at full tilt: Chartreuse Diffusion SA; 2013 turnover - 13M Euros. The Carthusian motto is "stat crux dum volvitur orbis", or "the Cross is steady while the world turns". Hopefully, this spinning refers to astrophysical insight rather than  pastoral overindulgence. Chartreuse Verte is supposedly made of 130 herbs. I wonder whether anyone has done any high resolution mass spec on it?
Posted by Jeremy Smith at 8:00 AM