TITAN and the Exascale - difficult power? 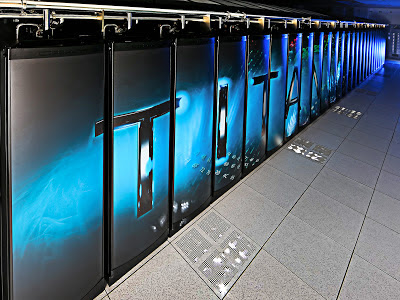 The Titan supercomputer here at ORNL was recently unveiled as the world's fastest (for now) and led to several of us talking on various news outlets such as the Washington Post, BBC, NPR and CNN. Certainly, us "apps guys"  congratulate the hardies on the big iron they have managed to design and construct, and as we move towards the exascale there are exciting possibilities as to what theoretically one could do with such machines. But, now, more than ever, it has become clear that the promise of these supercomputers will remain unrealized without concerted and sustained methodological and software development. As far as applications in the biological and soft matter sciences are concerned, little emphasis has been put on these aspects. Although, thanks largely to our own, unfunded efforts, we are just about able to scale on TITAN, doing better won't happen without new methods being developed by teams of theoreticians over several years. It makes little sense to me to invest billions of dollars over a decade or so in these machines but virtually nothing in what is needed to make them work well, does it?

Posted by Jeremy Smith at 8:19 AM No comments: 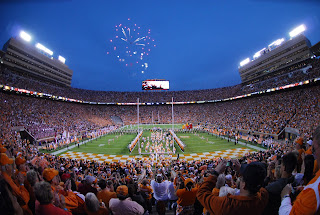 
Today the University of Tennessee announced the hiring of Buster Jones from U. Cincinnati as our new football coach, dumping a financial burden onto the university on top of the payouts to the two other recently-fired coaches,  Phillip Fulmer and Derek Dooley. A consequence of this trigger-happy firing behavior is that the Athletics Department will forgo its usual donations to the university academics for three years, and this has led to significant criticism, including from ex Faculty Senate president Louis Gross recently on local TV.

Now, as a relative outsider, i.e. having been parachuted in from Europe, maybe I have a fresh perspective on things.  In my opinion the world of big-money college sports should be completely  financially independent from the university. I stress here the "big money" aspect, because having a variety of sports accessible to students at a university is generally beneficial, and part of student education. Financing track and field, football fields (not stadia), a swimming pool, baseball diamonds, changing facilities etc is certainly part and parcel of the standard university experience.

But subsidizing multimillion-dollar big-money football with money ostensibly given to finance the education of the kids of the state is an unjustifiable diversion.  Now, NCAA figures list UT as one of the few colleges whose athletic department actually does not draw much upon university finances. This may be the case, although it is subject to argument. For example, the rest of us pay overhead on income generated for UT whereas the athletics department does not. But where there appears to be little room for doubt is that, on average, athletic spending nationwide is solidly in the red. The USA Today database of 218 Division I public schools  for 2009-2010 documents a total of $6.2 billion spent on college sport of which $2 billion came from subsidies from the schools, and this in a time of general dire cuts and increased tuition fees.


Now, I'm not saying that  the taxpayers of a state don't have the right to subsidize their favorite college sports teams if they wish. But it should be done in a transparent way.  Formally separating the finances of the big-money sports programs from the minor sports and the academics would be a sensible way of achieving this.

Posted by Jeremy Smith at 2:44 PM No comments: