A Special Pill Just for You

One of the many significant acts of my former advisor, Martin Karplus, was to help set up, in 1989, Vertex Pharmaceuticals -  one of the first companies to use a design strategy based on "rational", structure-based approaches.  Now, Kalydeco, designed by Vertex, is a glimpse into the future of personalized medicine. It is the first cystic fibrosis drug to treat the underlying cause of the disease, and works for those ~4% of patients with a certain mutation of an ion channel, which is potentiated by the drug. 4% amounts to about 2,000 patients, for whom this a wonder drug.  However, Vertex has slapped a $300,000+  yearly price tag on this drug, making it one of the most expensive in existence, and this has led to an understandable outcry from various sources, including some scientists involved in the development of the drug itself. In retort, Vertex point out that they have spent $6.5 billion on R&D that needs to be recouped and that it has only two drugs on the market.

Given that personalized medicine is aimed at ever smaller numbers of patients,  many fear that this approach will lead to ever more expensive drugs. But the one facet few seem to be talking about in this context is the origin of that  $6.5 billion number above. Most of that outlay will have been researching failures. Many of us are now trying to develop fast and efficient ways of finding drug candidates that are more likely than before to have high efficacy and safety.  This will get more personalized medicines to market quicker, with less R&D outlay. It stands to reason that if Vertex had discovered Kalydeco earlier, when its total R&D outlay had been only, say, $1 billion, then the price tag would have been lower.

It's not written in stone that personalized medicines will have to break the bank.
Posted by Jeremy Smith at 1:46 PM No comments:

The Cost of Doing Business 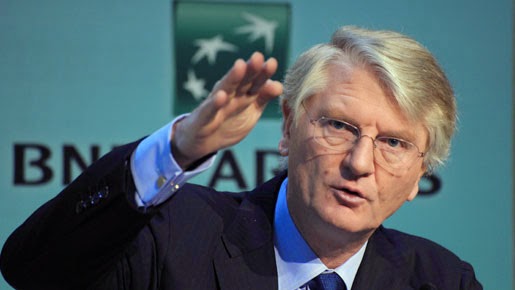 Baudoin Prot: CEO BNP Paribas. Financier of the Year 2006, Recipient of the 'Social and Corporate Responsibility' Award of the Foreign Policy Association,  2007.


I like to see two sides to every story, but I have never really been particularly enamored of Western institutions aiding and abetting genocide. Recent examples of this include government support of East Timor, Guatemala, Kurdish Iraq and elsewhere, but the very latest in the news concerns the French bank BNP Paribas. According to the UN, between 2003 and 2007 the genocide in Darfur resulted in at least 200,000 deaths, principally civilians massacred by Sudanese government forces and the Janjaweed militia they supported.  The US had countering sanctions in place,  but these were flouted by  BNP Paribas for whom the lure of oil money was just too great. BNP  became the 'de facto Bank of Sudan', playing a 'pivotal role' in helping the Sudanese government sell oil in violation of the sanctions, funneling billions of dollars to the government, most of which bankrolled the military thugs. BNP covered it up for years. Eventually found guilty, the bank settled with the US for  $9bn a few days ago. BNP states it has ample funding to cover this. It's not going to perturb them too much. No individual has been charged. They will sleep soundly at night. As Forbes magazine states, banks  call this merely "the cost of doing business".

Posted by Jeremy Smith at 8:49 AM No comments:

How to Waste Taxes

Don't you love it when bureaucracy goes nuts?

Here are  two cute examples from this week starring yours truly, both concerning travel reimbursements.

No point in naming the organizations responsible;  one was state and the other federal;  nor in criticizing the administrators I interacted with, who were only following the rules, but;

(1) A form was returned to me as invalid because I had claimed ONE CENT less than the amount on the receipts.

Moral: Make sure we spend $100 of effort to correct a 1 cent mistake.

(2) A travel claim that has been bouncing around for two years (!) was finally definitively refused because, in a  attempt to save taxpayers' money on a flight, I had purchased a  round trip international ticket for $184 on a low-budget airline (Ryanair) that had only one  class. As no class was specified on the ticket this meant it couldn't be reimbursed.

Moral: Let's make sure we discourage personal initiatives to save taxpayers' money.