So the continental passion for plagiarism finger-pointing would now appear to have finally reached the USA.

The recent  wave of appropriations appears to have started in Germany, with a number of high-profile politicians resigning after having been  inculpated for lifting sections of their doctoral theses. The first of these was  Karl-Theodor zu Guttenberg, the German Defence Minister (aka Baron Cut-and-Paste) in the Xeroxgate affair of 2011, and since there have several more, including the Education Minister Annette Schavan in 2013. There's even a website, Vroniplag, where theses can be virtuously scoured.

Now the plague of plagiarism seems to be overrunning US politicians and journalists as well.  While I remember Joe Biden purloining from Neil Kinnock in 1987,  there has been nothing like the density of recent episodes, including, to name but a few,  Fareed Zakaria, Rand Paul,  John Walsh and, in the last couple of days alone Mary Burke, the Gubernatorial candidate for Wisconsin and Gordon Ball, the challenger of Senator Lamar Alexander here in Tennessee. Each time the perpetrator is accused of vile cheating and resignation is demanded.

So what are we to make of all this? Well, for us scientists the rules are relatively simple: thou shalt not find out about someone else's original idea then claim thou hadst it first. And that's what makes the cases of the German politicians relatively cut and dried; they cheated, claiming originality of ideas,  in order to get their precious doctoral titles.

But in the recent US cases things seem to me to be  not always so clear. Certainly, when a politician states something in a powerful and original way, as did Kinnock in 1987 [Why am I the first Kinnock in a thousand generations to go to university? .... Is it because my ancestors were thick? ..... No, it's because they didn't have a platform to stand on]  then attribution is called for. But copying bland, unoriginal  prose into one's newspaper article or campaign website, while showing laziness or incapacity for original thought, does not imply the same level of theft. Stating that "a strong military is the basis of peace" should not require explicitly crediting the Darius the Great with having had the idea, should it?

Claiming original  ideas (or  novel, enlightening reformulations of old ones)  from others  is serious plagiarism.  The rest of the bleating is becoming rather trivial.


Posted by Jeremy Smith at 7:55 AM No comments:

"That the two Kingdoms of England and Scotland shall upon the First day of May which shall be in the year One Thousand Seven Hundred and Seven and for ever after be united into one Kingdom by the name of Great Britain And that the Ensigns Armorial of the said United Kingdom be such as Her Majesty shall appoint and the Crosses of St. George and St. Andrew be conjoyned in such manner as Her Majesty shall think fit and used in all Flags Banners Standards and Ensigns both at Sea and Land."
Posted by Jeremy Smith at 3:50 PM No comments:

The Age of Aerobatics 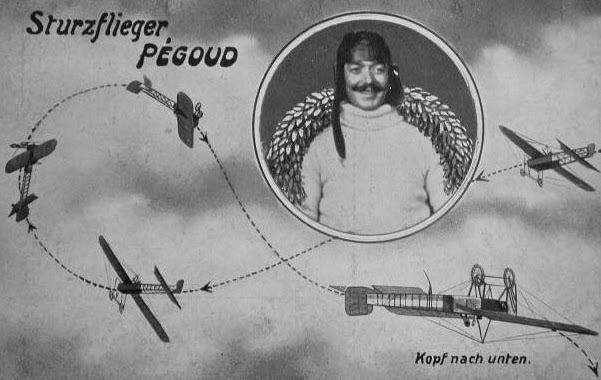 In the 1990s I lived with my family in Chateaufort-en-Yvelines, near Paris.

- On 19 August 1913 Adolphe Pegoud  parachuted out of a plane from the Chateaufort airstrip. While descending, as he said, 'comfortably', he noticed his empty plane performing weird arabesques in the sky before crashing. This gave him the idea to fly a plane upside down, which he then did,  thus inventing aerobatics.

- Chateaufort has a little hill, which, though nothing like l'Alpe d'Huez, is still celebrated, as the last hill on the Tour de France.  We watched the Tour there in 1994. Arriving an hour before the riders were due, we waited three hours for their arrival, during which two storms passed over. After an inexorable parade of cars, they flew by, bunched, in a confusing flash.  I looked for the yellow jersey - there were five of them. In 1989 they erected a bronze stele at the top of the hill for Jacques Anquetil, the first cyclist to win the Tour five times. It was quickly stolen, presumably for the metal, and replaced with a less valuable version.

- Chateaufort has a restaurant called La Belle Epoque, which was one of the snootiest in the region when we lived there. When my ex-advisor, Martin Karplus at Harvard, asked where I lived, I replied that it was very small and he wouldn't have heard of it. He persisted, and when I told him he said "Wait a minute! Doesn't that have a nice restaurant?"

Posted by Jeremy Smith at 7:46 AM No comments:

One thing I never really understood about the USA is this need to elect judges. In Europe, where I come from, judges are by and large appointed according to how good they are for the job, rather than for political reasons. In other words, what counts is how well any prospective judge knows the law.  The politicians make the laws, and the judges simply decide whether these laws are being followed, don't they? Having elected judges certainly makes them accountable to the public, but how is there public to know who is a good or bad judge? Moreover,  candidate judges  have to bend to popular undercurrents and special interests.  A weird procedure. Hey, why not elect doctors and professors as well?
Posted by Jeremy Smith at 1:59 PM No comments: