Today a BBC clip on the Titan supercomputer just appeared, in which various people talk about the computer and I mention some possible applications, mentioning goals to 'save the environment, cure all known diseases and solve the world's energy problems'.  However, the clip as edited may give some people the impression that we will actually be able to solve all these great societal problems with Titan! However, of course, all the computer is likely to be able to do is to make contributions to these fields. For example, theoretically, it would be able to screen millions of compounds on hundreds of protein targets, and that might help us design better, safer drugs. Also, it may be able to perform new simulations useful in understanding biomass pretreatment and processes in the environment.  Also, I mention in the clip atomic detail models of the living cell, which may be 'theoretically' become possible with exascale supercomputing, but only on the microsecond simulation timescale,  such that we need also to pursue ensemble based approaches on smaller systems that can extend simulation timescales. What was not mentioned in the clip, but was said to the reporter,  was the significant, fundamental  algorithmic and methodological problems to be overcome  in order to exploit the full power of these new machines. There is little support for tackling these challenges, at least from my perspective, and primarily for this reason the medium-term usefulness of supercomputing in the biological and medical sciences seems rather uncertain at this point.
Posted by Jeremy Smith at 7:02 AM No comments: 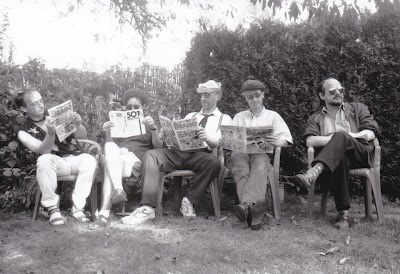 Check this smooth number out.

Posted by Jeremy Smith at 6:34 PM No comments:

Why I'm Against Affirmative Action

I just served on an National Science Foundation  panel, in which  'broadening the participation of underrepresented groups' is a priority when choosing which proposals to fund, then came back to Europe where the German Bundesrat passed a measure requiring 40% of executive boards to be female. This made me think further about the general principle of affirmative action, and especially in science.

I think some aspects of affirmative action, and especially the Bundesrat decision,  serve neither the underrepresented groups or anyone else. Quotas   automatically decrease quality  (because selection is not purely on achievement and suitability), discriminate against majority groups and lead to failure and inferiority complexes for those favored. Hence,  I agree with the conservative Supreme Court Gratz v Bollinger decision which barred quotas and disagree with Grutter v Bollinger that allowed them in a different form. Further, affirmative action  only makes sense to me if discrimination on the basis of nationality is removed. Right now, you can be a ethnic minority female disabled  Romanian or Thai working in the U.S. but unless you are a U.S. citizen you cannot be an affirmative action beneficiary.

As for diversity, in science in the U.S. (not France or Germany) this happens naturally, and our lab has always been wonderfully diverse, with, for example, sometimes simultaneously members from more than 15 different countries, but that wasn't intentional, it just happened, and unfortunately it's not what myopically qualifies as diverse for the U.S. Government.

Nevertheless, especially in the U.S., there is enormous untapped talent in the economically disadvantaged population. Our efforts should go into encouraging economically disadvantaged kids and educating their parents, well before university, and it shouldn't matter what nationality, ethnicity or gender they are:  white, black, Hispanic, Slovakian, Asian, disabled, French, American. Also, of course, those disadvantaged kids who prove themselves to be  hard-working and talented need to have an opportunity to pursue higher education equal to their richer peers.   Equal opportunity. No doors closed. Yes, all need to be given "a shot" but none propelled through on a soft cushion.

Notwithstanding, given the hypothetical situation where I must choose between two Ph.D. candidates with exactly the same grades:  one rich and the other poor, I will choose the poor kid every time. Not through pity or positive discrimination or for championing underrepresented groups, but simply because I'm likely to get more bang for my buck from a kid who has fought their way out of the projects.

Now, let's get down to organizing those East Knoxville high school lectures...