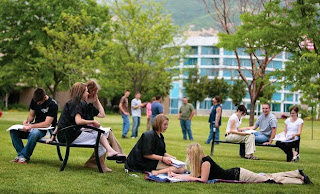 As someone from the sceptr'd isle that has suffered over millennia from the divine right of kings, I have a keen aversion to inherited privilege. Escaping that and jumping to the world's great maelstrom of equal opportunity seems as good a reason as any to move to the USA. Except that, according to a recent article in the Economist, the Great American Classless Meritocracy appears to be an illusion.

The USA is still a meritocracy. Indeed, income is tied more than ever to qualifications. But it's an hereditary meritocracy: the children of the rich and powerful become better qualified.  And while parental educational level has always been the best predictor for child success, now money is having an increasing influence. Several factors have led to this. Strangely, American public schools are funded according to the wealth of their catchment area. Also, expensive tuition fees have made parental wealth increasingly important in gaining access to college. Compounding that is favoritism in colleges selecting children of alumni and the non-meritocratic effects of affirmative action, which disfavors poor Caucasians and Asians.

What to do about it? Well, maybe I detect a weakness. Apparently, most of the recent increases in college tuition fees have gone to the country club elements: plush dorms, parking garages, climbing walls, student services etc, and not to  improving the quality of the education itself. Therefore, it makes sense for poorer students to seek colleges without these amenities;  where the costs are solely in providing an education. They'll then be competitive in what counts most for their futures: their qualifications. Anyone know a four-year college like this? That's a strategy for challenging the hereditary meritocracy.