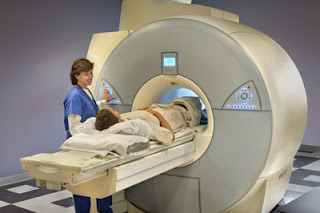 I had an MRI recently. (Nothing serious). How many of you have had an MRI, then, huh?

Well, one has certain thoughts going into that tunnel. The first I had was  "Don't think about being buried alive".  And the second was "How do they get anyone to go in there at all?" I mean, your nose, your toes, and all the rest of you is an inch from bloody solid confinement. I thought that if they put in a UV source as well, it could double as a tanning machine, giving patients  extra incentive, "scan and tan". Then I thought "Oh my God I had iron-fortified breakfast cereal just before coming here".  But it was too late. They slid me in. The MRI sounds started, a kind of deafening dubstep, I believe. Has anyone made a No 1 hit out of that? Then I thought "Why am I in here?". Because conventional medicine would say "Take an aspirin" whereas in the absence of tort reform it says "MRI and CAT scan".  Of course, once in, and only once in, I got an uncontrollable and violent urge to scratch everywhere. But you mustn't move, not an inch. Aaaargh! Still, too late, wasn't it? Kept saying to myself "Too late".Then you realize they're going to see through you. Your insides.  I never wanted to know what has become of that stuff. But then you think someone might finally get to see your six-pack. Yes, its there, just  under a lot of protective coating. Not so bad then. I tried to look at my watch.  The bastards had stolen it. I counted sheep. But when I got to where they should pull me out the machine kept going for an eternity. No! No! They were torturing me. I could imagine their wicked grins.

Then it was over. Ahhhhh! And the result - well, I got a crummy MRI. Bad resolution. All because workers changed a lightbulb while no-one was looking and it screwed up the magnetic field. So all the Doc could say was, "Well, we proved you are capable of laying in a closed, confined space for two hours".

Posted by Jeremy Smith at 6:08 PM No comments: