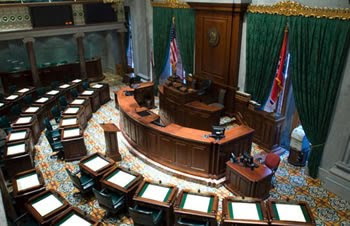 ..a venerable chamber that performs sterling work for the people of the state (and the University of Tennessee).

However, were the senators sponsoring bills to be a little less clueless about what it is they are actually proposing, then certain birth pains would be avoided ....
Posted by Jeremy Smith at 6:47 PM No comments:

One of the things about Martin Karplus that many of us impatient, ambitious young co-workers at Harvard used to complain about was how long it took to get one's work published with him. One of my manuscripts sat on his desk for 18 months then he lost it. But Martin is a perfectionist - for him a piece of scientific research needs time to mature, to develop, and he wanted to make sure all was rounded, completed, cross-checked, watertight. And so now Stefan Fischer, another perfectionist, has an article on haemoglobin with Martin just accepted in PNAS. The work was started in 1992 and so they have been polishing on it off and on for nearly 20 years. One would work on it a bit, then the other, then neither for a while. The result was a high quality piece of work. I'm sure every sentence was thoroughly thought through.

So why am I bringing this up? Firstly, to demonstrate the futility of funding agencies micromanaging projects and asking for immediate impact. This distracts from innovation. The impact of the money funding the above PNAS paper will be felt only 30 years later. This is not to try to circumvent accountability. Rather, that more emphasis on judging us should be placed on what we did years ago, rather than last week. And secondly, to my irritated students complaining about manuscript slowness after hearing nothing from me for a few weeks - think yourselves lucky, you might have ended up at Harvard! Happy 81st, Martin.
Posted by Jeremy Smith at 11:50 PM No comments: