Thief in the Bureau of Criminal Investigations! 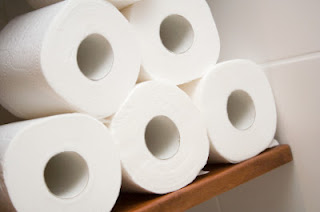 The local Heidelberg rag - the Rhein Neckar Zeitung - has always been a source of pleasure. A while ago I reported on the amusing article about the  Natural Healing Club in Spechbach, and this last visit to Heidelberg revealed another gem.

Apparently, the "Thueringer Landeskriminalamt" i.e. the local Bureau of Criminal Investigations, suspected a toilet paper thief in their own building in Waltesleben. Their suspicions had been aroused after complaints by the cleaning personnel. So, in the beginning of 2011, they installed a hidden camera in the place where the rolls were kept.  However, the film was never processed because there were no further thefts. The personnel and workers were informed only after the fact.


Posted by Jeremy Smith at 2:58 AM No comments: 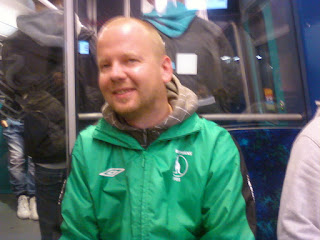 Meet Kristof, a Czech, sitting opposite me in a Copenhagen S-train, on the way back from the Brondby versus Horsens game that we both saw.  I met him on the platform at the train station after the game - there were the usual rowdies and then the two of us, both trying to make sense of the railway map.

He supports the  Bohemians. Now that's normal because Bohemia is Czech [BTW there's another Bohemians team - the one in Dublin - so to try to confuse us the Czech team wears Irish green (see above) whereas the Irish team wears red and black].

Anyway, I digress. Now, I'm quite a soccer aficionado, but by him I am  thoroughly outclassed.  Kristof is the REAL deal. In 2007-8 he went to every single Bohemians game - home and away. That already put him in the die-hard top 5% or so. But it wasn't enough, so since then, on Fridays he takes an overnight bus from Prague to some other country, takes in one or two soccer games, then returns back overnight on Sunday again just in time for work. He's probed 28 countries like that! And what makes him even more amazing is that he doesn't just watch the big teams - he watches the little ones as well. One trip to the cold North of England took in Fleetwood FC,  who were, like, in the tenth division with about 100 supporters per game. So he's clearly one sandwich short of a picnic.

Brondby are now useless and in crisis (they're so bad the ticket man let me in for free!) but on Sunday I will watch Hoffenheim, who are now useless and in crisis, then next Saturday I will watch Norwich City, who are....you guessed it. Ahem! So, for voluntarily subjecting oneself to this drivel, maybe one has a slight  touch of insanity oneself?
Posted by Jeremy Smith at 1:02 AM No comments:

This is Auditorium A of the Niels Bohr Institute in Copenhagen in 1930. 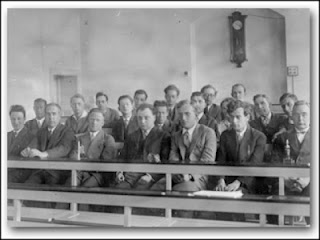 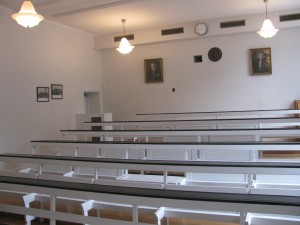 Here is the same auditorium today. It's unchanged, which is, of course, fittingly romantic, but I must say the benches aren't big enough to lodge laptops, and the coffee room is a Spinal Tap-esque adventure to get to.

We just finished a neutron data workshop in Auditorium A. This was, needless to say, a useful topic, but somehow we didn't quite reach the pinnacle of enlightenment of our predecessors, as they established the Copenhagen Interpretation of Quantum Physics.....

Freedom of Expression: A Means to Oppression?

I was just wandering along the street in Copenhagen today when, at around 2.30pm I came across the merry little gathering  below: 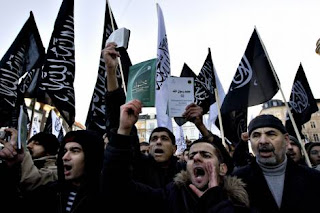 That's Hizb-Ut-Tahri demonstrating outside the US Embassy. (Jakob Ehrban took the  photo above.)

The demonstration seemed to be peaceful, about 200 people I'd estimate. I couldn't understand what they were saying but one banner did strike me. It stated :"Freedom of Expression: A Means to Oppression".  Hmm.  Now, I know freedom of expression does not exist in  some Western countries. But oppression itself originates in censorship.  And thus I disagree with those who state, for example,  that Holocaust denial, however unpalatable,  should be banned. Such people should instead be countered with the force of argument.

But what about Hate Speech?  This is generally protected in the US under the First Amendment, but exceptions are made for incitement, and the movie that has caused all the fuss above must surely fall under this category.  However, to generally associate freedom of expression with oppression? - now that's a leap of faith.

OK, another musical masterpiece, completely different to Sam Hall.  This  piece I composed recently. For the specialists, it's my first ever MIDI composition (something I should have been doing 20 years ago) the sounds made with the Halion Sonic SE synthesizer in the Cubase LE AI Elements 6 music software, using an Axiom 49 keyboard MIDI controller.

The track is called "The Pig and Whistle".
Posted by Jeremy Smith at 2:56 PM No comments:


Here's a not very good video accompanying me singing an old British Music Hall song - Sam Hall - about an unrepentant murderer. The music was recorded in a kind of hole-in-the-wall place in Knoxville that sounds like it could have been next door to Tyburn.  All good clean fun....
Posted by Jeremy Smith at 1:02 PM No comments:

As we move into another election in the USA it's worth spotlighting politicians who decry science itself.

There are politicians who are plain ignorant, such as the Minnesota Congresswoman Michelle Bachmann who claimed that the HPV vaccine has “very significant consequences”  citing the anecdotal case of a woman who had told her that her daughter “suffered mental retardation as a result of that vaccine.”

There are politicians who deny global warming, such as the Senator from Oklahoma, James Inhofe, who brilliantly states that Nature magazine is " a very liberal publication".  Then there are  the politicians who decry evolution or GM foods.  In the eyes of the German Greens, for example, and the majority of the European Parliament, GM foods, as they are controlled by big corporations, have to be evil, and the science showing GM crops are harmless has to be wrong and biased. Many of the same promote alternative medicine, which, by definition, is medicine that has been proven not to work, or not been proven to work. [These politicians want to divert money that could be spent researching actual evidence-based treatments  to quack remedies. Clever, eh?  And why should their  $60bn dollar alternative medicine industry need no external regulation? Either their remedies have a clinical effect or they don’t; and if they do they should be treated like any other drug.]

Science becomes political when it spurs political action. The divide here is not between ‘pro-science’ and ‘anti-science’ political parties at all. Rather, politicians and parties will always side with science when it suits their constituency or conforms to their interests.  When not then they deny the science is right and cherry-pick anything that seems to confirm their prejudices.

In election season, let's pinpoint those who deny science for political ends. In the words of the President of the Royal Society   Sir Paul Nurse, (a native of Norwich!) “We can’t sit by without exposing bunkum.”