True to our Values

OK, who do we back in the Middle East conflicts? I mean, we’ve got to back SOMEONE, haven’t we? We have to remain true to our values, don't we?

This year is the 50th anniversary of little-discussed, but classic example of these values, when the US backed the genocide of about a million “Communist” villagers by the Indonesian military, with the CIA supplying lists of names to the perpetrators. The genocide was celebrated by many over here, and by Time Magazine as “the West’s best news for years in Asia.” 10 years later we went one better, supplying not only political backing but also 90% of the military equipment Suharto needed to massacre another 100-200,000, this time in East Timor.  And it wasn’t just a Cold War anomaly, because Western support for that regime continued well after 1990, into the Clinton years.

Don’t expect our choice of who to back in the Middle East to be influenced by such petty considerations as the potential genocide of those who live there.
Posted by Jeremy Smith at 5:28 AM No comments:

FIFA? What about Britain? 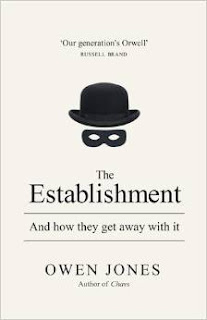 So we're all delighted that FIFA appears to finally be getting its come-uppance for long-established corruption. Now what about Britain? The above book convincingly demonstrates that the country of my upbringing has, over the last 30 years or so, become ruled by an oligarchy of sickening corruption, an unaccountable network of people who wield massive power and reap sickengly huge profits at the taxpayer's expense. Case after case of multi-billion dollar  thievery from those running  the state-corporate nexus is documented and referenced.   Now, unlike the author, I am no socialist, and do not yearn for the 'good old days' when the unions held the country to ransom. But privatization only works when real and fair competition brings efficiency up and prices down. In Britain, time after time, enormous monopolistic government contracts have been awarded to  companies who simply  raise prices to cream off profits with no investment. Those doing the awarding get their rewards in the revolving door system.
And the hypocrisy of what's said and done is incessant:

Here's one of my favorites:

Tony Blair, Chicago speech of 1999: "We cannot turn our backs on the violation of human rights within other countries....."

Tony Blair, 2011 onwards: Paid  more than $13M  for advising the dictator of Kazakhstan, Nursultan Nazarbayev (who massacres strikers, bans and attacks by arson any press criticizing him, tortures and kills the opposition etc etc) on how to present his country to the world in a positive light.


Posted by Jeremy Smith at 7:00 AM No comments: