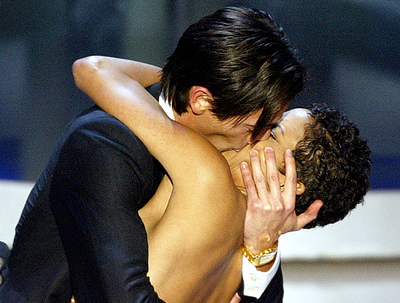 Oxytocin is the love hormone, the magic chemical  that creates warm, fuzzy feelings of bonding, trust, empathy and cuddle cravings. When someone's level of oxytocin goes up, he or she responds more generously and caringly, even with complete strangers. This is useful of course; for example, in the bar (chatting up a hot chick), or on the battlefield (making the Islamic Insurgents fall in love with their enemy).  The problem is though, that oxytocin has to be injected, which is rather inconvenient, of course on a first date  ("Excuse me, Cindy, just roll up your sleeve"?), and negotiating a ceasefire on the field for such a purpose is likely to prove nontrivial. So what is needed is something that one can just spray, or pop in a drink. That could be an oxytocin activator.

Now, how about this? Last week at a neutron workshop in UCSD I chatted with Bi-Cheng Wang of UGA, with whom I wrote a paper 15 years ago on the activation of oxytocin (Boris Velikson was my postdoc who did the modeling). On the bus at the airport we decided that all we need is to design a molecule that will do the activation (cleave the precursor at Arg2-Asp13) and voila! - beautiful people wherever you need them. Drug is the Love! Anyone having problems with the wife or got an obstreperous teenager? Maybe a dog that barks too much? Send the research dollars our way!!!

Posted by Jeremy Smith at 4:06 AM No comments:

I have been a fan of yours for 47 years.
I have never wanted you to lose before.
Not against Villa at Wembley when I was a ballboy.
Not against Chelsea or Panathinaikos or Inter Milan or Bayern (and certainly not Ipswich).

But I  bought a ticket to the Newcastle game on January 28th and a flight ticket back to the USA on the 29th. And now you have announced that, should you beat Fulham in the F.A. Cup 3rd round reply tomorrow night, the Newcastle game will be put back one day, to the 29th.

So tomorrow you must sink. Lose! Go Fulham!

With temperatures  in Knoxville presently sliding towards zero Farenheit I was trying to remember the briskest weather I have experienced. It may well be the period of January 3rd-January 18th 1985 when I lived near  Grenoble, France. The temperature in the town never rose above freezing during that 18-day period. The average was around 10 degrees F and the lowest was -1F, on January 6th. Now that was in the town, and I lived 1200 ft  higher, at La Grivolee (see red arrow), so the average at home would probably have been about  4F and minimum about -5F. My poor little 2CV car, nicknamed "Turbo",  was just a cracked block.
Posted by Jeremy Smith at 1:05 PM No comments: