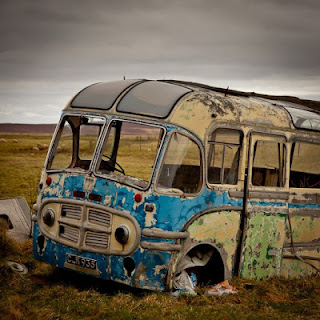 [Old Bus on the Isle of Hoy, Scotland. Photo by Martin Bay].

Time to spruce up the old bangers, maybe? We're economizing on travel!

I'll be giving a resounding  Plenary Lecture at the International Conference on Neutron Scattering in Edinburgh in July. However, it now appears that very few colleagues from the USA will be there to witness this edifying spectacle.  You see, we are now seeing the effect of The New Travel Restrictions. Indeed, the Energy Department Inspector General's report notes that in the last six years  over 90,000 contractor employee foreign travel trips occurred with a cost to the government of just over $300 million.  That's quite a lot of dough!

Now, don't get me wrong, I am strongly in favor of reducing unnecessary government expenditure, but things need to be thought through, or unintended consequences shape the end result.  In the case of scientists, many lay-people don't realize that talking with other scientists about your work and learning about other scientists' work in person are absolutely critical to making key discoveries. If scientists don't go to foreign conferences then they don't get to talk with people from other countries  about projects, and, moreover, they don't get to publicize their work. So the result is less well-informed, less motivated scientists doing poor-quality work that no-one else in the world pays much attention to. This reduces significantly the value of funds invested in the research in the first place. To put it another way, we may well spend $3bn on the Spallation Neutron Source, but  if we then try to crimp a few thousand dollars by stopping people going to the world's premier neutron conference future work at SNS will be of lower quality and the worldwide standing of the USA in the neutron sciences will be significantly diminished.

Here's an alternative suggestion. It seems to me that, unless my maths is really, really bad, the figures above equate to about $3300 per person per trip.  How about simply putting a cap on foreign travel of, say, $2800 per trip? People can get to most places for a $1500 airfare and $200 per day for the hotel and registration. They might have to work a bit online to bring costs down, but that's the point, isn't it?  Better still, if we were to allow lots of  our IT researchers to go to foreign conferences about high-performance computing then, sitting down over a few beers with their German, Chinese and Japanese counterparts, they might just figure out a way  to make videoconferencing really fast and high quality, thus obviating the need for any foreign conference travel at all.  And don't worry, for quite  a while alcohol has not been reimbursable!
Posted by Jeremy Smith at 3:21 PM 2 comments:

There's nothing like a crisp winter hike in sub-zero temperatures!

Starting at 1,362 feet the South Old Mac trail rises steadily for nearly two miles to the summit at 3,324 feet.  Cold indeed it was, especially at the start, but the trees were bare and the cold seemed to lengthen the penetration of the views. We soon warmed up.

In the early 1800's, settlers from the mountainous regions of Scotland and Wales moved into the Frozen Head area and built homesteads in the high mountains. I  am presently trying to learn  Old Time Music in Knoxville,  and would have loved to have witnessed their Ceilidhs.  Later, local coal  was deep mined using, presumably less joyful convict labor.


The fire tower was built in the 1930s to spot fires and trespassers.  They didn't seem to be up there, though,  in the  fall of 1952 as the  entire state forest was burned by the worst forest fire season in state history.
Posted by Jeremy Smith at 2:13 PM No comments:

Well on New Year's Day I had the pleasure of driving down to London for the West Ham v Norwich game with Dave Jordan. I hadn't seen  Dave since 1976, when we were both 16 and pupils at Earlham High School. Now, the school itself managed to get itself recently ranked among the bottom 1% of UK high schools and was thence demolished (snif) but our footie team in the 70s wuz magic, and we were both in it.

Dave was a midfield dynamo with a cultured and accurate left foot, and later he coached a successful set of village youth teams in Norwich.  Now,  in our days there were very few scouts for the pro clubs at games, but, apparently Dave's Taverham kids team were constantly sniffed out by the sinister agents from Norwich City, who wanted to identify talent for their 'Academy'.  Now, an Academy is the route to stardom, or at least a living wage doing what you love, and a few prodigies can even be signed to million-dollar contracts in their early teens. But after a while the reaction of Dave and his fellow coaches when they saw the scouts arrive was to pull their best players off the field.  Why would they do that?

Well, signing for an Academy means leaving your friends,  the environment you're used to, and becoming the 'property' of the local pro club. Too may times Dave saw enthusiastic, talented kids snatched by the Academy then returned used, hollow shells of what they were. So he wanted to resist the uprooting and hence his reaction when the sharks were spotted.

The answer must be that there should be a middle way, a way for the most talented kids to receive expert coaching from the academies without giving up having fun with their mates, playing for the local teams as well. And the same goes for any walk of life, not just soccer.  Pro soccer clubs are right - the earlier you can get hold of a kid the better, and the same goes for science - but this needs to be done without uprooting kids from what they know.
Posted by Jeremy Smith at 3:37 AM No comments: