Much obliged kind sir - members of our lab greedily devour your posts as well.

Now, I really must get back to preparing Monday's UT physics colloquium.
Posted by Jeremy Smith at 3:10 PM No comments:

OK, so I respond to the comment on the previous post claiming that climate change data are phony and rigged to achieve a predetermined conclusion. The principal reason that this is unthinkable is that hundreds climate data have passed the peer review system by which anonymous experts opine on the veracity of data and conclusions in any scientific paper. Anonymity means that the authors are not told the identity of the reviewers who are then freer to criticize without fear of professional retribution. Now, the peer review system is highly imperfect – the reviews themselves are frequently wrong or contradict each other, and thus rubbish gets published, including in the very top journals. We’ve had famous examples of that, even from respected professors, such as the water memory/cold fusion affairs, and, in the other direction, future Nobel-prizewinning science has been initially rejected. Furthermore, peer review, and the funding process, does not fully protect against cronyism and gatekeeping: a paper or grant proposal challenging orthodoxy is more likely to be rejected (unless clearly irrefutable) as the editor and reviewers are more likely to support the mainstream. But this is natural: extraordinary claims require extraordinary evidence. Further, these papers can be resubmitted and, if they are of some merit they will likely eventually appear in some other peer reviewed journal, where they will then likely attract unusual subsequent attention. The nature of science is such that these published results can be objectively tested independently, and by this process the truth normally is established. Further, scientists in any field LOVE to prove each other wrong because it is a great holier-than-though schadenfreude feather to have in one’s cap. I have a colleague who spent almost his entire illustrious career doing that. Science is highly egotistical and competitive – we work against more than with each other.

In the case of climate change, there are large uncertainties and unknowns in the science. However, the critical point is that we are not just talking about one set of data or a single paper, but a large collection of observations and calculations: 928 papers between 1993 and 2003, for example, none of which disagree with the consensus. If the data supporting the general warming trend were to be mostly ‘phony’ and ‘rigged’ then there would have had to have been a fraud of absolutely unprecedented proportion. Thousands of brilliant, accomplished and respected scientists, reviewers and editors from all over the world, working for many different disparate, independent organizations, would have had to have conspired to create an enormous, insulated, fantasy world of rigged publications. If ever that happens public mistrust will be such that society may well give up science altogether and go back to the days of pre-enlightenment irrationality: a state of affairs in nobody's interest. Even had there been a political incentive for a massive scam, which there was not, it would have been unworkable.
Posted by Jeremy Smith at 7:10 AM 13 comments:

I was saddened to read about the e-mail hacking into the Climatic Research Unit of the University of East Anglia. I feel I have a special connection to UEA CRU because it is in Norwich, the town of my roots, and because it was founded by H.H. Lamb, the father of a family friend, Norman Lamb, who is the Lib-Dem MP for North Norfolk and a shadow minister.

Of course, although I haven't actually read many of them, I feel I can comment on the e-mails, anyway! They seem to reveal scientists refusing to disclose data and ganging up on a journal and other scientists.

Well, disclosing data can be a tricky problem. I myself will not often let data we have or papers we are writing out of the lab until the work has been accepted for publication.
The reason for this is primarily that I don't want to release results until I feel we are reasonably sure they are reliable and that we have done our best to fully understand them. Otherwise, one runs the risk of having to confusingly and damagingly retract hastily-drawn conclusions. In the case of UEA, the data concerns work after publication, which should normally be released (although we all know of many cases where scientists keep crucial data to themselves even then!). However, it seems the data concerned were not UEA's to pass on, anyway.

In another set of e-mails Phil Jones, the present CRU director, is revealed strongly criticising other scientists, and even a journal as being not a legitimate peer review affair etc. All this seems par for the course as far as I can see: normal scientist private chit-chat. I wouldn't be surprised if, in my own e-mails sent over the last 15 years there were evidence of lopsided views, bias, and discussions with collaborators as to cunning strategies to get our own work pushed on the community at the expense of other, competing scientific philosophies!

How does science overcome the scheming, biases and collusion? By working with fact-based consensus. Occasionally, even a leading scientist who has published respected work may then publish something he/she believes is rigorously demonstrable and proven but in fact is unfounded, wrong and has simply slipped through the peer-review process (the reviewers didn't recognise the problem). Plenty of papers in top journals qualify as such. However, if the work seems important several other groups, maybe from all over the planet, will independently take it up, repeat it, do other experiments/calculations that test it, and fail to substantiate it. The work is then naturally consigned to oblivion or moved to the slow-burner. Only by fact-based reinforcement do ideas gradually receive a solid consensus.

With climate change, as UEA stress in their recent post, the reinforcement exists in multiple strands of evidence: not only their own work, but also long-term retreat of glaciers in most alpine regions of the world, reductions in the area of the Northern Hemisphere (NH) snow cover during the spring season, reductions in the length of the freeze season in many NH rivers and lakes, reduction in Arctic sea-ice extent in all seasons, but especially in the summer, increases in global average sea level since the 19th century, and increases in the heat content of the ocean and warming of temperatures in the lower part of the atmosphere since the late 1950s.

Although I am not a climate expert, my knowledge of the system leads me to believe that it is impossible that climate change be some kind of massive hoax or collusion or that the consensus is fundamentally wrong. UEA CRU, starting with H.H. Lamb (who, according to Norman, did not himself believe in anthropogenic climate change) , have played an important role in helping reveal the facts. May the illegal hackers be themselves excoriated.
Posted by Jeremy Smith at 2:45 PM 3 comments: 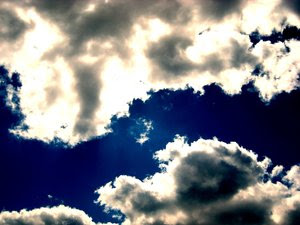 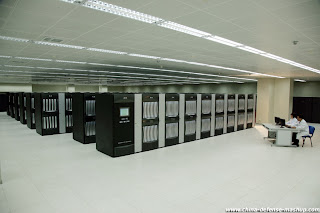 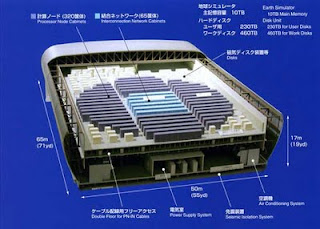 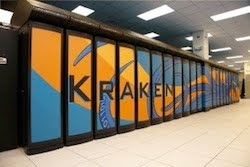 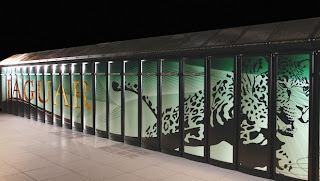 Fearsome beasts! Now arguably the most friendly animals to be found at the Supercomputing '09 conference in Portland oregon were in the Baby Supercomputer Petting Zoo.
Posted by Jeremy Smith at 2:34 PM 4 comments: 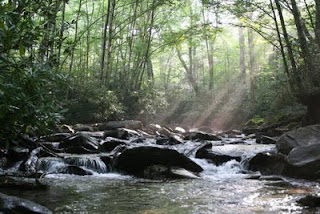 Well, occasionally when I think we are about to publish something that might be of interest to the public I will write a short paragraph and send it to the ORNL and/or UT press officers for their perusal. This has led to several press releases in the last few years, including this and this. However, the recent work on mercury, a pollutant in streams such as the one above, turned out particularly contagious, perambulating around onto several other outlets, including the local newspaper and television and various specialised national sources. So why all the (relative) fuss?
Well, the previous releases that were direct to the press (as opposed to web pages erected by ORNL or UT entities, which are less likely to be scanned by journalists) concerned protein folding, neutron scattering and protein interactions. Although, in my opinion, the interest to the public of work in these fields is as great as the mercury studies, (e.g., knowing how to fold proteins would revolutionize medicine) it probably doesn't trigger the immediate spark in the minds of readers that 'mercury' does: any news piece that requires even the slightest little bit of intellectual effort from the reader before interest is stimulated is less likely to be read - it's only natural. And with protein folding and interactions the reader is initially in unsure, foreign territory.
Also interesting is that, although our work, based on calculations by Jerry Parks, is solid and published in a good journal, it is only incremental and is built on a large amount of existing knowledge generated by established researchers in the field such as Anne Summers (UGA), Sue Miller (UCSF) and Tamar Barkay (Rutgers). In other words the work on mer operon function over the last 20 years or so was all just as newsworthy as ours, if not more. More generally, the field work, geochemistry, biochemistry and molecular biology underway in the mercury Science Focus Area at ORNL is of intense general interest. So there's clearly a disconnect here as only a small fraction of genuinely interesting scientific results end up in the general news. There's a lot one could say about this and information flow and filtering in general. However, we, as scientists, need to think when we are about to publish, whether the public might be interested in some aspect of our results. We need to learn how to express our work in concise layman's language, and to constantly disseminate. The public that feeds us needs feedback.
Posted by Jeremy Smith at 6:03 AM No comments:

Seem to be spending a lot of time giving talks and the like recently:

- Last Friday a talk to West Knoxville Rotary - it was fun to do and a synposis of the lecture is given here.
- an interview on Tuesday with WBIR with Jerry about our mercury work (hasn't been aired yet).
- a talk to ASCAC on Tuesday.
- a panel discussion yesterday at the SNS/Juelich spin echo inauguration
- a talk yesterday at the NSE workshop
- a talk with Martin Keller to the DOE Under Secretary for Science today.