...and now for a 'political' statement of sorts - the first one, I guess.

As someone who has lived in four health systems (Britain, France, Germany and the U.S.A.) I find it quite amazing that there is a large chunk of the local population who do not regard the provision of basic health care as a fundamental human right, and who seem to be under the impression that the systems in Europe and Canada are inferior to the present US state of affairs. Concerning the human rights issue, I don't think everyone should have the automatic right to the most expensive treatments for every ailment they present. We're not talking about expensive, state-of-the-art health care for everybody's minor ailments here - just the basics, but with everything possible done for serious cases. That's the way it operates in other countries.

Furthermore, there is a clear problem in both the American and European systems, which is a lack of incentivisation. Here's an example of cost inefficiency from personal experience here, although it could just as easily have happened in Europe. A year or so ago I visited the doctor for a benign, minor viral skin infection. He offered me the choice of two solutions: self-applied curettage (cutting the viral lesion off) or an anti-viral cream. I chose the cream and, when I picked it up at Walgreens, found it had a rather surprising co-pay of $70. The pharmacist explained that the total cost was $600 so the insurance was covering $530. further, it turns out this cream benefits only about 10% of patients (the virus goes away by itself anyway). So the choice had been between an effectively zero cost procedure and one with marginal benefit for $600, but the cost was never even considered in the discussion with the doctor. Now, I'm not saying we should cut corners in providing proven treatments for life-threatening cases, but the automatic dissociation of costs from the consideration as to what steps to take in all cases leads inexorably to inflation.
Posted by Jeremy Smith at 2:32 PM No comments:

This is Simply Ridiculous 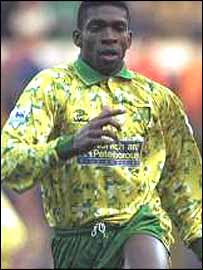 Above is the 1992-1993 strip of Norwich City Football Club, frequently voted in the 'worst kits of all time' lists - it looks like a flock of gulls circled overhead for a couple of hours before the game. However, that team finished third in the premier league.......


Now, I know that since Norwich City Football Club were relegated to "League One" (in reality the THIRD division) on that fateful day of May 3rd 2009 (see here for appropriate poetry marking the occasion) I am no longer a supporter and care not one tinker's cuss about how they do. However, I did accidentally click on a link that happened to give me the result of their first encounter in the nether reaches of English soccer yesterday - a 7-1 defeat at home to Colchester!
25,000 flag-waving fans giving them a thunderous welcome as the team walked out to play a side whose complete national support consists of one 87-year-old ex-postman who keeps mistaking them for Ipswich, the manager's farm-boy nephew who gets a free season ticket and his rosetted horse, Kenneth,.. and then... Two City fans marched onto the pitch at 0-4 and flung their season tickets at Bryan Gunn, the manager. What a load of rubbish, and that's putting it politely!
Posted by Jeremy Smith at 12:23 PM No comments:

When I was a student the UK academic pecking order seemed to be Oxbridge followed by the other collegiate universities (Bristol, Durham) together with Imperial and the northern red-bricks (Manchester, Leeds etc), and, lastly, the 60s concrete jungle universities.

In the 2008 UK academic research assessment exercise, one sees that some of the 60s universities have come a long way. Congratulations Essex, Warwick and York!
Posted by Jeremy Smith at 6:36 AM No comments: