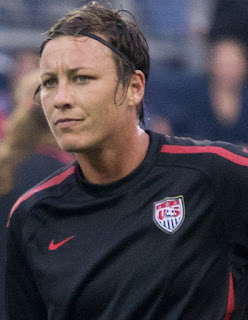 Several recent articles have been decrying the pay gap between the US Men's and Women's Soccer Teams, noting that in 2015 the women were paid less than the men even though they won  the World Cup.

Now, soccer players are paid pure and simply according to how much revenue they bring in. The fact is that, averaged over the year, far more people watch the men's game.  Therefore, the male professional game in the USA is alive and well, whereas nobody wants to watch the women outside of the World Cup. As for the World Cup itself, the 2014 men's winners (Germany) took 6.6% o the revenue whereas the 2015 women's winners (the USA) took home 11%. Hopefully the situation for women professionals will change, and the women's game will improve, attracting more spectators. But, until then....

Where's the discrimination? Am I missing something?
Posted by Jeremy Smith at 5:30 PM