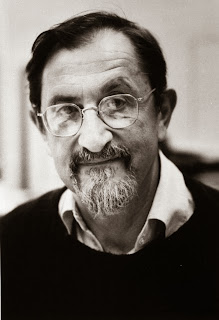 The Nobel Prize in Chemistry was today awarded to my postdoc advisor, Martin Karplus (above) together with Michael Levitt and Arieh Warshel. These are three of the main developers of our field of biomolecular simulation. This announcement was somewhat a surprise as this field had not been a favourite in the "betting". Also,  there are several other scientists in the field who, in my opinion, have made comparably strong overall contributions. However, what the three winners played leading roles  in in the 1970s was certainly special -  the genesis of biomolecular simulation.  Scientists had before that time already been deriving spectroscopic force fields, to match infrared and Raman frequencies, but these don't provide information on structural energetics. Also, others had been working on molecular mechanics force fields and methods to find energy-minimum conformations of organic molecules and peptides. The three winners, inspired by Lifson in Israel, were at the origin of many of the ideas that have slowly blossomed into the present-day biomolecular simulation field, in all its glory, with molecular dynamics simulations of biomacromolecules, QM/MM calculations of reaction rates (which, perhaps surprisingly, was the sole subject of the Nobel citation), protein folding calculations, free energy analyses, the design of drugs currently on the market,  and everything else.

All three of the winners have had to endure heavy professional criticism from different parts over the years. Our field was frowned upon by many for a long time. Many of the calculations performed were, and are, wrong, inconsistent, biased and disagree with experiment and these shortcomings were jumped upon by discreditors and still are, although to a lesser extent, nowadays. However, the three Laureates certainly got everyone's attention early on. I don't know Michael Levitt personally so well, but of course I know his work. In the 1970s and 1980s, working in Cambridge, he published papers folding BPTI and predicting protein stability that created quite a storm. Arieh Warshel was at the origin of some of the key concepts in the field - I would think of his multiple papers on the electrostatic control of enzyme reactions. As for Martin, he's been absolutely towering. Carefully building up the complexity of the systems he studied, from simple hydrogen reactions through conformational NMR to large biological complexes, his contributions have been wide-ranging, careful, and thorough. His QM/MM work was but a small part of his overall career.

As ever in human life, the strongest reflections at these times are maybe personal. Michael Levitt impressed me by working mostly alone for a long time, when everyone else was building up large groups. Many of us know the twinkle in Arieh Warshel's eye when he stands up in a conference and criticizes the speaker, and we can all recognize his 'anonymous' referee reports. As for Martin, he has left an indelible impression on all of us who have passed through his lab over the last 50 years. He's has been a dedicated servant to science - a role model for us all. Congratulations to all three - and to my ex-boss in particular!