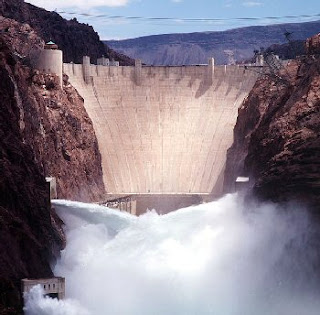 I just delivered the Karcher Lecture at the University of Oklahoma. People call this university OU and not UO. [I wondered if this was  to avoid  students saying "I go to the University of Oklahoma" and being subjected to the smug retort: "Ah, You Owe!" But, I digress :-)]. Karcher discovered reflection seismography  when working for NIST, used these to discover oil, then co-founded what became Texas Instruments.  Texas Instruments is where Jack Kilby worked when he invented the integrated circuit, the basis of computer hardware. He won the 2000 Physics Nobel for that. I liked Kilby's Nobel lecture in which he stated how he felt when he saw a computer: 'It's like the beaver told the rabbit as they stared at the Hoover Dam. "No, I didn't build it myself, but it's based on my idea."'
Posted by Jeremy Smith at 5:32 AM