Secret of a Snake's Slither 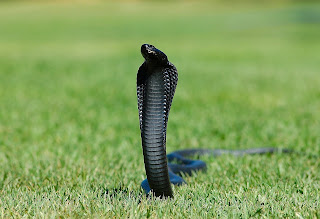 I have always been fascinated by snakes, such as this black spitting cobra.
But how do they move?
Ever since I sat as an undergrad in Leeds University library reading
Nicolas Rashevsky's "Mathematical Biophysics" treatise, which proposed, amongst many other things, a model for snake locomotion, I have wondered about this.


"In this experimental and theoretical study, we investigate the slithering of snakes on flat surfaces. Previous studies of slithering have rested on the assumption that snakes slither by pushing laterally against rocks and branches. In this study, we develop a theoretical model for slithering locomotion by observing snake motion kinematics and experimentally measuring the friction coefficients of snakeskin. Our predictions of body speed show good agreement with observations, demonstrating that snake propulsion on flat ground, and possibly in general, relies critically on the frictional anisotropy of their scales. We have also highlighted the importance of weight distribution in lateral undulation, previously difficult to visualize and hence assumed uniform. The ability to redistribute weight, clearly of importance when appendages are airborne in limbed locomotion, has a much broader generality, as shown by its role in improving limbless locomotion."


..and this is the species of snake, the Common Krait, that kind colleagues in the Ecology Department of the Indian Institute of Science in Bangalore took me to see on a field trip near the Western Ghats in September 2008: 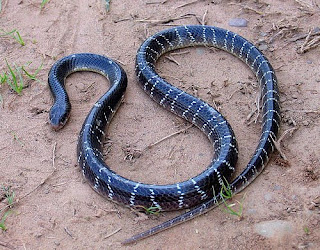