In the 1970s, during the day  the Leeds University Union Refectory, my undergrad cafeteria,  used to serve up the most awful garbage: exemplified by the insipid yellow matter custard of the Great British 20th Century Culinary Tradition. But at nights the Refec served us the best of pulsating 70s rock. You see, it was the  biggest concert hall on the thriving British college circuit,  holding over 2000, so we got all the big bands: The Stones, Led Zeppelin, the lot.  But no gig there was more famous there than The Who's Live at Leeds, recorded in 1970 and generally recognized as the best live album of all time. But, alas, that was  before my period of frequenting the Refec.


But we did get some real classics. Andy Kershaw, a fellow student, was the unpaid Entertainments Secretary of the Student Union: he spent all his time booking the bands and thus failed his degree. (Despite this  failure he was recently awarded an Honorary Doctorate there, as he subsequently became a famous broadcaster.) He squeezed in some beauties. 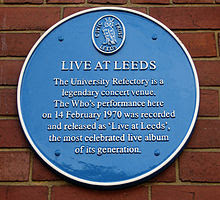 In Freshers week in 1978 we had The Ramones and I twisted my ankle pogo-ing to Cretin Hop early on. Ouch! Then came The Stranglers, The Jam, UB40, Joy Division, George Thorogood, The Specials, Ian Dury etc. Surprising we got any work done, really. Kershaw himself  reckons the greatest gig there was The Clash in 1980. I was there too, but bored silly. Musical beauty - in the eye of the beholder, I suppose.