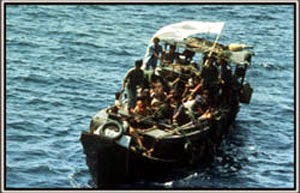 My next-door neighbor in Knoxville is from Vietnam. As a teenager in the 1980s he was in a monastery, but the communist government didn't tolerate monasteries.  So he became a fisherman, and decided to bide his time, learning the ropes. At the age of 19 he escaped in a boat with an engine, but was driven back by a typhoon. (Many perished in such typhoons.) One year in jail followed. My neighbor doesn't recommend communist jails. Then, he tried again, captaining a boat with 37 people, this time with no engine, and made it across the South China Sea to the Phillippines.  My neighbor: one of the Vietnamese Boat People. Puts the rest of us to shame, I think. How many more stories are there like that in the leafy subdivisions of middle America?
Posted by Jeremy Smith at 10:59 AM