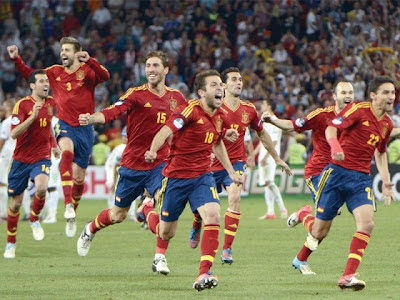 Spain, who just won the European Championships, are, in my opinion,  the greatest soccer team ever.
Now greatness cannot measured by who would beat whom in some hypothetical match-up, but by how far and for how long a given set of players in their time stands above the rest of the world, and it is their sustained dominance that gives Spain 2008-2012  my vote.

Spain have no rivals in Europe, as the 1974 'Beckenbauer' West German side and  the 1998 'Zidane' French (who I watched win the World Cup in the yard of an old farm in the Aveyron) both failed (just) to win three majors.  Spain's only rivals would be the 1970 Brazil side, who won all of their World Cup games that year, and had a number of individuals such as Pele and Jairzinho, who combined  skill and explosive power in a manner unseen before or since. Brazil 1970 was almost universally considered the greatest team of all time - until July 1st 2012.  But apart from one World Cup that Brazil side won nothing else - there was no serious Copa America or Euro equivalent to test them - and they fizzled in the World Cups in 1966 and 1974.

So Spain win on results, and for me they win on style as well. You see, I have always liked precise passing, consistency and intelligence. That's what Spain, who had never done anything in international football, brought to the game in 2008, when Luis Aragones decided they were not tough enough to beat other nations physically and needed instead to keep the ball. So he instilled the "Tiki-Taka" possession football that Johann Cruyff had initiated as manager of Barcelona.

Now Cruyff  arguably was the world's greatest ever player, but that's a whole new discussion....
Posted by Jeremy Smith at 4:02 PM