Golden Eagles in Tennessee and Scotland 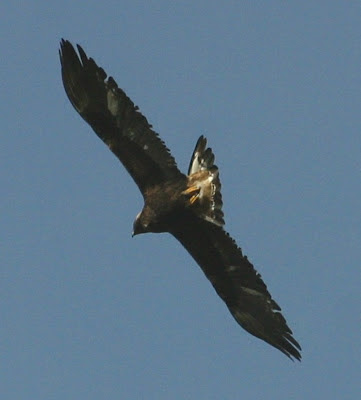 Good to read in the Knoxville News Sentinel that Golden Eagles may be soaring above the East Tennessee mountains somewhat more frequently these days. I remember them from the 1980s in North-West Scotland, where my father and his wife lived, in a place called Achnanellan, on the banks of Loch Shiel. Achnanellan is hidden in the wilderness, an old 17th century croft house with no road (you have to cross the Loch to get to it) and no neighbours within 4 miles. A place of ferocious weather and swarms of midges, of rich lichen and peat.
Here it is - the croft is a tiny white speck in the middle: 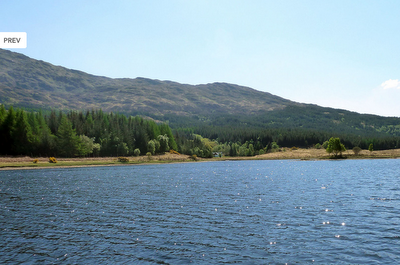 Achnanellan means "Field Near the Island", the island being St. Finnan's Isle, a windswept ancient burial ground. I set foot on it, and wondered at the dour, very old crosses (below). The locals had divided half of it for Protestants and half for Catholics, and placed pennies in the trees as votive offerings. There was maybe one burial per year there in the 1980s, probably many more before the brutal Highland clearances. The old bronze bell in the ruined chapel was still there, rumored to be a thousand years old - no-one had stolen it. 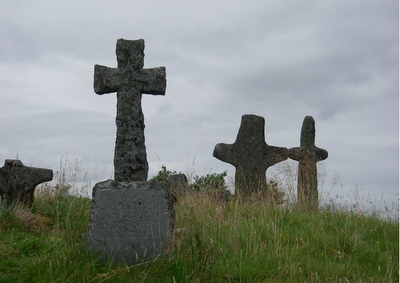 As for the eagles, they were always far above our heads, 1000 ft or so, hunting rabbits with acuity from on high. They fly in monogamous pairs and look like flying planks. It was difficult to fully appreciate their 7-foot wingspan from that distance, but pictures of one digging its talons into a cameraman truly bring home their size and power. Achnanellan, St. Finnan's Isle and Loch Shiel belonged to the eagles.
Posted by Jeremy Smith at 4:22 PM