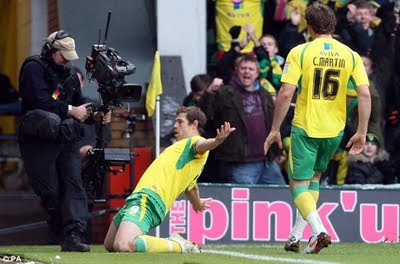 On 8 August 2009 Norwich City, who had just sunk to the doldrums of League One (the English Third Division) were hammered 7-1 at home, the worst home defeat in their 107-year history, by the tiny minnows of Colchester United. That day of humiliation will ne'er be forgotten. However, the hitherto useless Board then miraculously saw the light, as they then summarily sacked the Norwich coach and (ahem, illegally) stole the Colchester coach, Paul Lambert (below), instead! 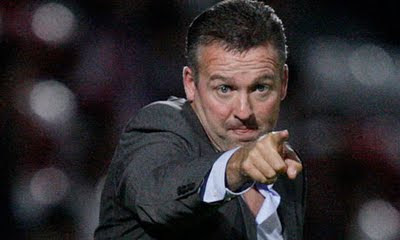 
Now, 21 months later, Lambert has steered City not only to the League One championship but, today, to the English Premier League. Back to back promotions, on a shoestring budget, and trashing Ipswich twice (4-1 and 5-1) along the way! Surely the greatest achievement in City's history? Although 23 million pounds in debt, the club will now receive a slightly obscene 90 million pounds for joining the big guys.

Now in 2009 I did write a bitter, angry poem to accompany them on the way down to oblivion. But somehow poetry excels only in times of grief so there will be no lines of verse this time round.

But, ahh, the heart could sing like a Norwich Canary!

Watch out Chelsea, Arsenal, Man U: you're all in for a serious pecking next season!

Update: this is why teams have difficulty in scoring against Norwich.