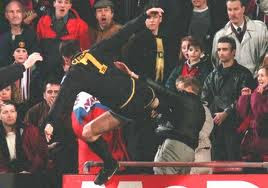 Well whoever would have believed it? Eric Cantona, here seen Kung-Fu kicking a Crystal Palace fan, has been named Director of Football at the New York Cosmos. Maybe he was chosen because of the deep philosophy he will communicate to the team? His proposed solution to the global financial slump was a run on the banks. And here's a favourite Cantona quote of mine: "Quand les mouettes suivent un chalutier, c'est parce qu'elles pensent que des sardines seront jetees a la mer (Seagulls follow trawlers because they think sardines will be thrown into the sea)". Important for young players to internalize these things.
Why is it that clubs think the best players always make the best directors? Surely Cantona will go the way of that other footballing great - chemical-crazed Diego Maradona - who, for some reason undeciphered by rational humanity, was chosen to manage Argentina for the last World Cup. Maradona guided the country to a 6-1 rout by Bolivia and a 4-0 hammering by Germany before leaving with the team in chaos.
Posted by Jeremy Smith at 3:57 PM