John Lennon, Natural Healing and the Church in Southern Germany 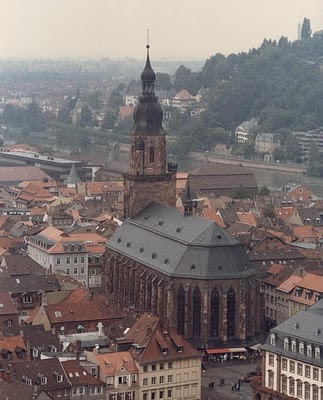 Well, I'm on one of my tri-monthly visits to Heidelberg right now, and happened upon a couple of articles in Friday's local Rhein Neckar Zeitung that offer contrasting perspectives on attitudes towards activities that, from the point of view of the Church in Southern Germany, might appear borderline.

The first article reported on a concert entitled "John Lennon forever!" by 'Freddy Wonder and friends' in the magnificent Heiliggeist Church in Heidelberg. The Lennon concert was hailed by all as a triumph and the Heiliggeistkirche as the perfect place to hold it, despite the fact that Lennon himself had an uneasy relationship with Christianity and, for a while, practised Hinduism.

The second article reported on the eviction of the "Naturheilverein" (Natural Healing Club) from the Catholic Church Rectory rooms in the tiny village of Spechbach in the surrounding Odenwald forest. The Club has been meeting in the Spechbach Rectory since 2002, and has now grown to 300 mostly female members. They were welcomed by the local priest, Father Meier, so long as they were offering innocent-sounding courses such as 'Mushroom Identification', 'Healthy Eating', 'Seminars for Couples and Pairs' and '"Classical" Homeopathy'. So far so good, but then the ladies started to offer suspicious-sounding courses in 'Chakra Meditation' and 'Healing with Stones'. Father Meier and the Catholic elders appeared to swallow hard and turn a blind eye. However, with recent offerings such as "Healing the Soul with Shamanistic Psycho-Kinesiology" the ladies have finally danced across the line, and are thus out on their asses. Pushed it a bit too far. They are, it is reported, rather aggrieved as they have already printed 4500 brochures for 2011 with the Catholic Rectory Rooms named as the meeting place.

I can't imagine 'Imagine' being allowed in the Heiliggeistkirche 30 years ago, so maybe the Nature Ladies would just need to wait awhile? Hard to predict that one, but I do suspect that in 2040 they'll still be in alternative accomodation.
Posted by Jeremy Smith at 4:50 AM