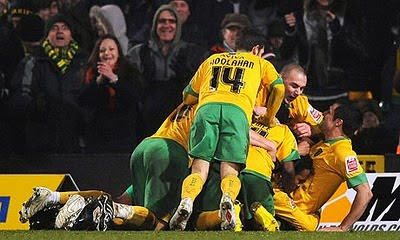 Norwich City just won the League One Championship.
Hence I should keep my promise and again lend them my support.

Let us not forget the team's 2005-2009 elegant swan dive from the heights of the Premier League to the sleepy backwaters of England's third division, which at times drew serious comparison with Britain's Official Worst Football Team (AFC Aldermaston, who recently scraped a draw after 40 consecutive losses).
Hopefully, the return to the second tier signals the swan dive was in reality just the first half of a sweet sinusoidal bungee jump back to the very top.....
Posted by Jeremy Smith at 9:32 AM