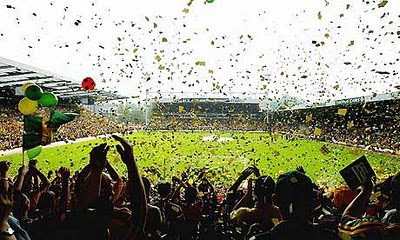 On May 3rd 2009, when Norwich were ignominiously relegated to League One, I announced that I was no longer a fan...and marked the occasion with a bitter, fractious poem.
Now, given recent exploits of the lads on the field there here have been raised eyebrows as to why my green and yellow scarf is still studiously banished to the attic.

it is true that..

- Norwich are presently top of the table
- The misers have taken 44 out of the last possible 47 points
- They have shattered the club record for the consecutive number of home wins (11 and counting)
- They are packing them in Carrow Road to a point where even flocks of migrating geese have been reported to pause and perch upon the Barclay Stand to take in the spectacle.
- Manchester United's manager, Sir Alex Ferguson, after his team's comprehensive defeat by second-placed Leeds, was rumoured to have said: "Lucky we weren't drawn against Norwich otherwise we would have got a real hammering."


However, one's support should not be pledged lightly.

Therefore, under the following conditions only will I formally resume with the Canaries:

- Norwich are promoted this year.
- Ipswich are not relegated. [Yes, not. This may sound strange given that Ipswich are Norwich's sworn lifelong arch enemies, but there would be little point in them plunging down past us as we are flailing past them on the way up, would there? The existence of the local derby is quintessential. Perenially one place above the relegation bracket is the ideal purgatory for Ipswich.]
- (optional get-out clause, to be invoked facultatively): Norwich City win the World Cup in South Africa this Summer.

However, even were the above conditions to be satisfied, there would, of course, be no guarantee of a celebratory poem.....
Posted by Jeremy Smith at 6:58 AM