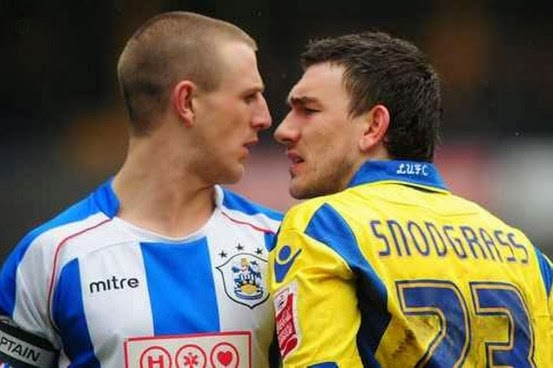 So on January 28th I was in Norwich and watched the Canaries take on Newcastle. The final score was a 0-0 tie.  Sounds boring to aficionados of American sports, in which it’s “No Ties Allowed”. But, in reality this game was 90 minutes of intensity in a packed, passionate, partisan arena.

First up was Despair, as in the first half Newcastle were all over us, streaming through the midfield, wave after wave of their highly technical French strikers floating effortlessly down the wings past our full-backs. Men against boys; no way were we going to survive this. Gloom. We would have even taken a defeat, then, as long as they agreed not to humiliate us with a thrashing.

Frustration set in, with chants questioning certain characteristics of the visiting fans. Then, our tempestuous Scottish winger Robert Snodgrass, who was having another bad game, fluffed a corner and got some resounding abuse from most of our section of the crowd (the Snakepit). Amazingly, the little brat retaliated! Swearing at us and gesturing! So, of course, we shouted at him even more.  How dare he? We pay him a bloody Fortune (probably millions) and he has the gall to play worse than a squashed haggis then cuss at us for tearing him off a strip!  (Bet you wouldn’t see that happening in the NFL, either).

But Newcastle didn’t score; they hit the post three times, our goalie was brilliant, and we did better in the second half, both teams pushing, each giving 100%, desperately probing for the winner - end-to-end stuff. Then our hard man, Bradley Johnson, tussled with Loic Remy. Johnson pushed him, the Newcastle star might have headbutted him, Johnson went down and all hell broke loose; all 22 players in a brawl, the whole stadium on fire, jubilation as Remy was finally red carded then vitriol as, on reflection, the ref inexplicably sent Johnson off as well.

Magnificent! But it wasn’t over – right at the end we twice nearly sneaked an undeserved winner, grazing  the bar then drawing an amazing save from their keeper. Afterwards, Snoddy came back down to the Snakepit and applauded us in contrition. We knew Snoddy gives everything - to quote Ray Hudson ‘working harder than a one-eyed cat covering three mouse holes’. So we forgave him and the evening finished in breathless mutual appreciation.
Posted by Jeremy Smith at 4:22 AM