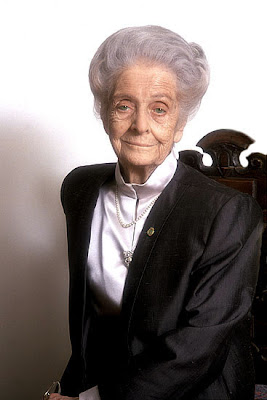 The soccer field is so frustrating. With age I have learned exactly what to do on the field but physically am no longer capable of actually doing it. Meanwhile the young punks mindlessly whizz by and crash out of bounds. Is it the same with science?

The conventional wisdom has been that scientific productivity dwindles with age - brilliant young scientists making outstanding conceptual leaps. However, recent work suggests that this is not the case, and that prime productivity is maybe around 50 years old.

Well, I'm beginning to come round to the idea that older folks maybe aren't as clapped out as we all used to think. For example, members of our center had the pleasure this last month of lecturing on "The Molecules of Life" to ORICL - the Oak Ridge Institute for Continued Learning. The class was mostly retired scientists and engineers and, let me tell you, they were the liveliest bunch of students I have lectured to in quite a while. This begs the question as to whether they were always that engaged or have perked up with the advancing decades. I know the latter is true of myself - the reason I interminably interrupt and yap about in seminars others give is experience - whereas 30 years ago I could understand hardly anything scientists were talking about, these days it comes much more easily, and I think the same may have been true of our ORICL audience. And some scientists I know keep working for ever and ever, it seems. Rita Levi-Montalcini, a 102-year-old Nobel winning scientist (pictured above) said: 'Above all, don't fear the difficult moments - the best comes from them."

So maybe instead of prematurely fretting about retirement planning, 51-year-olds like myself should realise that the best years of our lives are still ahead? This maybe true in science, but it doesn't alter the fact that I'd still like to punt those mindless young punks off the soccer field - if only I could catch them!